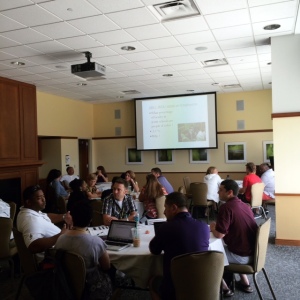 Being mindful of our language is so important as educators and parents – I recently presented my research to a group of 30 + professionals and am embarrassed to admit I used the word ‘minorities’. As I said the word, I also recognized that it was not a good way of describing the ‘marginalized’ in our society – but I’m not comfortable with ‘marginalized’ either. One of the participants, a colleague and friend I have known for some years corrected me immediately – ‘under represented’ . Thank you David. I promise never to use the word again, and have replaced  the ‘ m word’ with ‘under represented’ in all my work .

It’s great to be a presenter and national conferences, it’s even greater to learn from those participating.

: a number or amount that is less than half of a total

: the group that is the smaller part of a larger group

: a group of people who are different from the larger group in a country, area, etc., in some way (such as race or religion)

Jane.Bleasdale, PhD is Assistant Professor and Department Chair of Leadership Studies in the School of Education at the University of San Francisco (USF). Dr.Bleasdale has lived and taught in the United Kingdom, The Bahamas and the United States, Her career as an educator now spans three decades. Dr. Bleasdale previously served as a high school administrator focusing on equity and inclusion through personnel and student development Her doctoral research focused on equity and inclusion in high schools and specifically the experience of Black, Latino and LGBTQ students. She has recently conducted research on social and emotional wellness of students, the impact of school leaders on creating inclusive communities and critical feminist perspectives on leadership.Current research focuses on the experience and impact of women leaders with intersectional identities. Dr.Bleasdale is the principal investigator on a participatory action research project at USF collaborating with 10 doctoral students on a new paradigm for equitable leadership focused on critical feminst perspectives. View more posts